skip to main | skip to sidebar

Christmas Banner and How To Photos 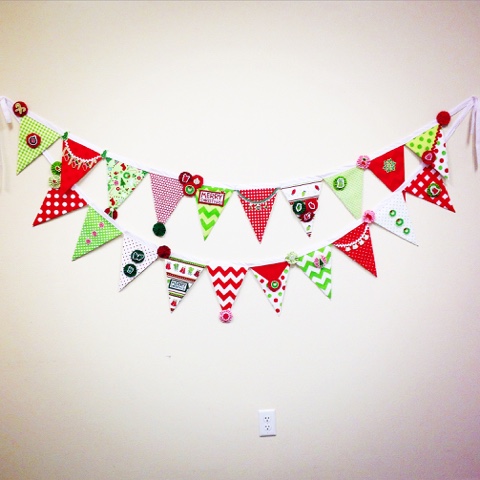 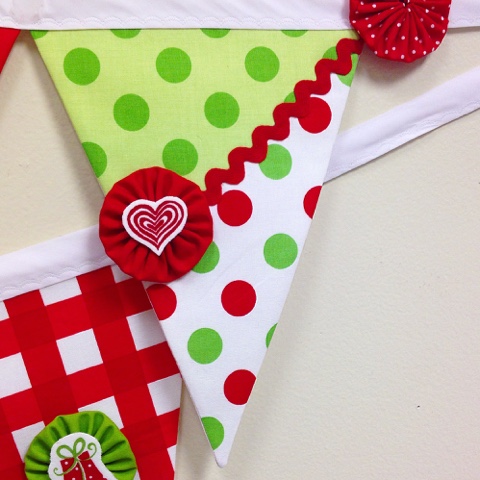 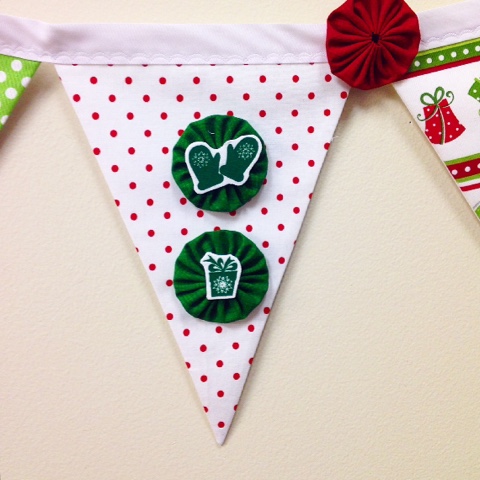 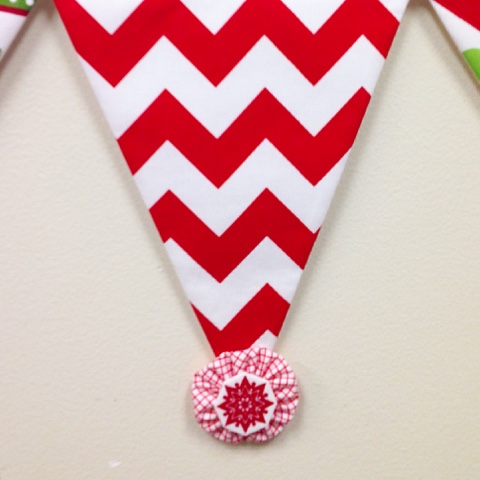 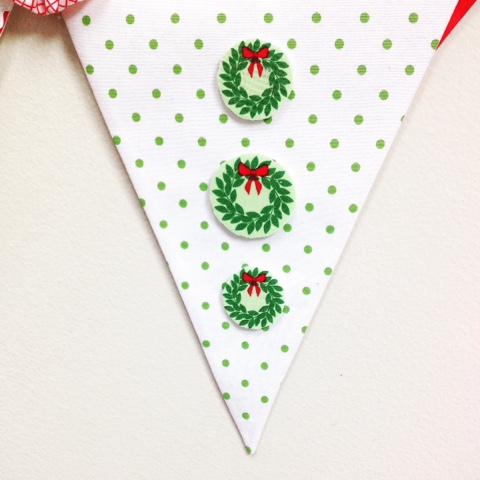 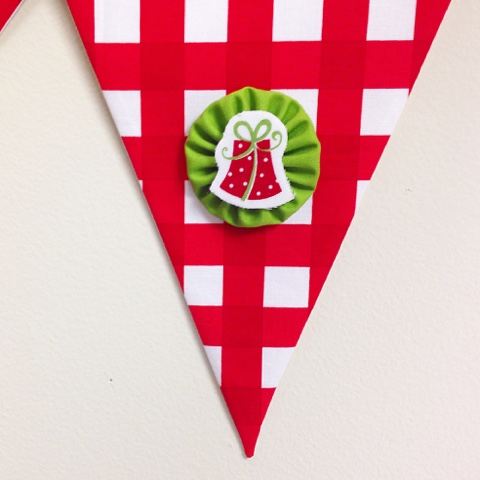 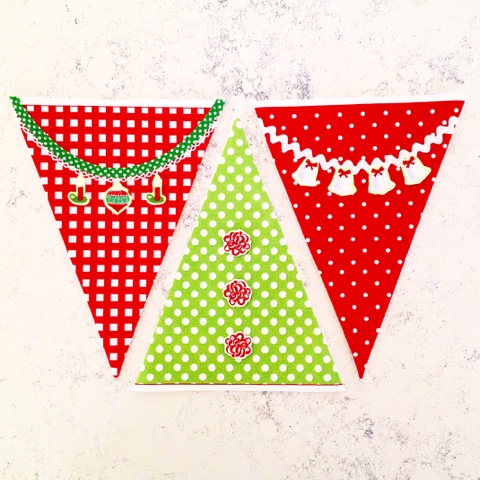 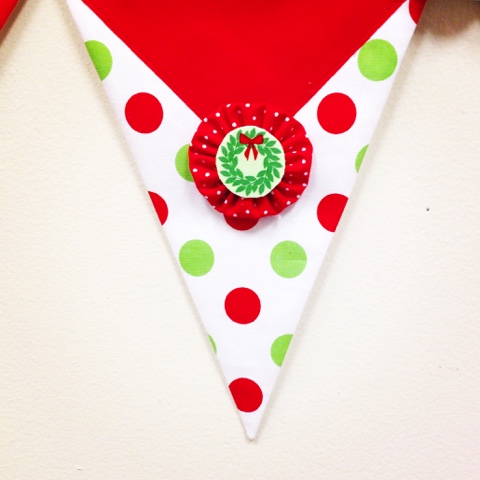 Posted by jeifner No comments:

A Halloween Banner and How To 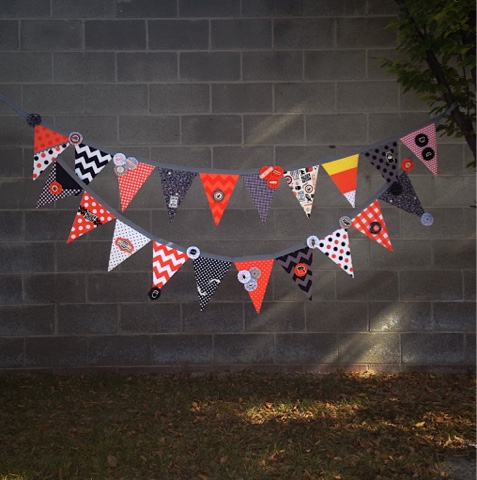 Posted by jeifner No comments:

I've never done the Bloggers Quilt Fedtival before and now that I can write a bit and I have a quilt I'm going to jump in!

I made it for IG: Mumziepooh and the IG Mini Swap. I was in #kaysgroup. This quilt finishes at about 12 inches by 12 inches which was the smallest dimension allowed by the IG Mini Swap. I didn't set out to make one so small it was just serendipitous, ha! I fully stalked my partner and saw a few Storm At Sea quilts on her Pinterest with comments about making one some day. She also liked stars and I saw some rainbow ones. I found a great free Storm At Sea free paper piece pattern at http://www.generations-quilt-patterns.com/support-files/storm-at-sea-quilt-blocks.pdf and then proceeded to reduce the size at least 50 percent. I don't know exactly how much as I just kept reducing it until I could fit 4 blocks onto an 8.5 x11 paper. I printed out their helpful coloring pages to figure out how I wanted my rainbow to go and then pulled fabrics.

I pieced and then frixion penned (that's a word) the quilting guide lines and then quilted the crap out of it. Some subtle stripe black binding, rainbow hearts backing, label and it was sent off! I was so pleased with how it turned out. It seemed like a little jewel sitting out on my counter. And I'm happy to report that Mumziepooh loved it :)
See all the other quilts at http://amyscreativeside.com/bloggers-quilt-festival/ 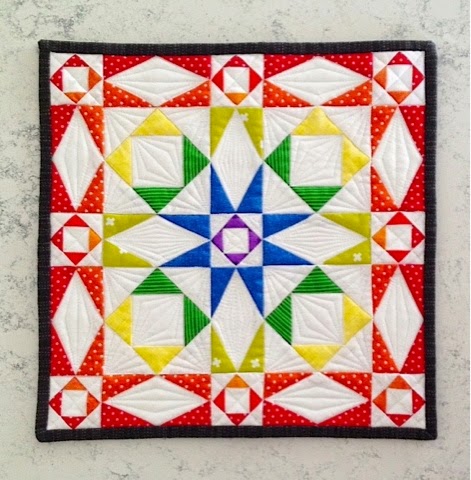 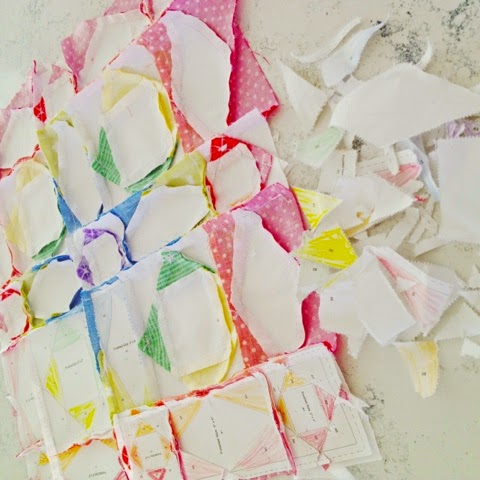 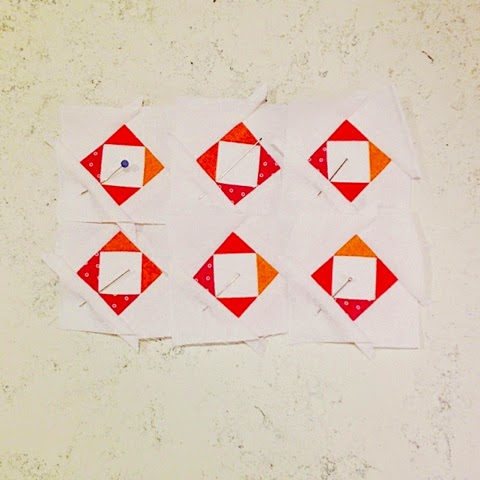 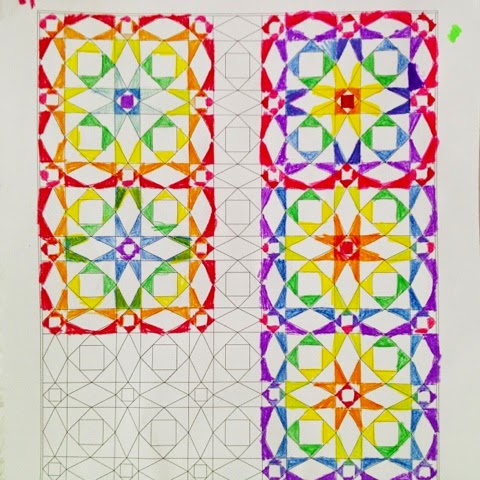 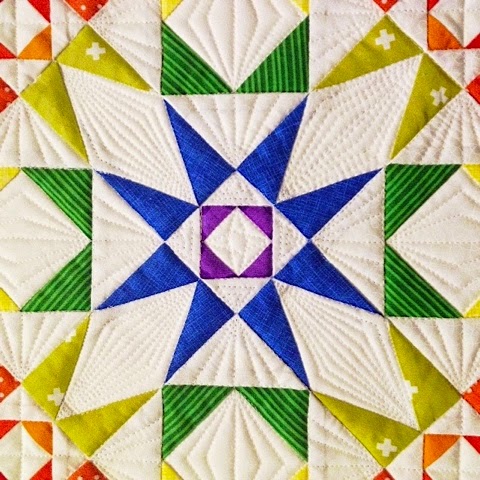 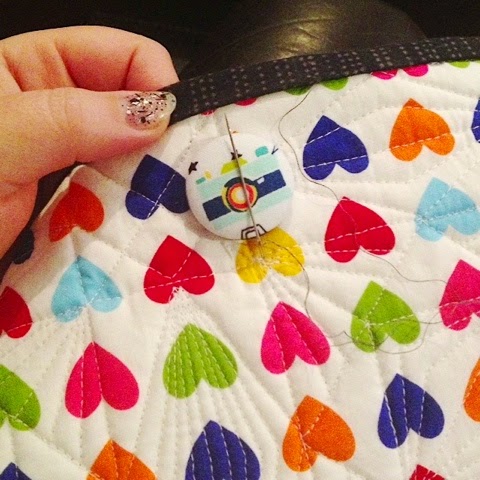 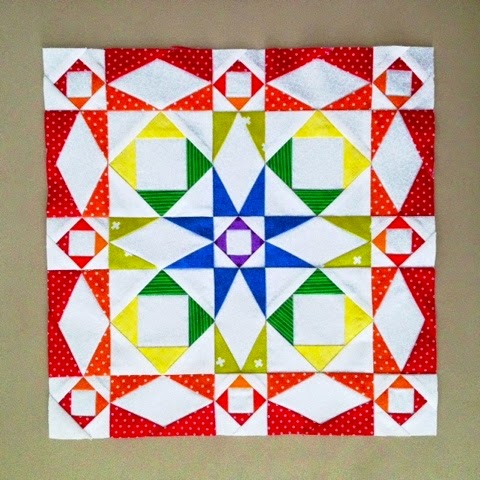 I'm in an art quilt group called the Four In Art. There is a theme we build our quilts around and this go around it is literature. There are quite a few deep concerns and ideas that others are tackling. But my immediate thought was highlighting my love of with Science Fiction. Sometimes I think because it a "fun" genre it doesn't get quite as much, mmm... Respect or credit. There are so many incredible authors and worlds to discover.

It is set in the future at some point and traveling through space is a given. So I eventually came around to a hybrid tactical and space suit. For both fighting purposes and spaceship/planetary movement. I kept focusing in my mind on just one section to show the texture of the suit. What you see is a chest portion with the lower left curve being the part that covers the sternum and the right wrapping around the ribs.

The space between the protective plates is silver and black and there is Kona Cotton and Shot Cotton as well as quilt prints. Aurifil 40 weight was used for the quilting and attaching the different pieces. And, as last time, it's backed in a Lotta Jansdotter white and grey mid-century spacey feel print.

The other Four In Art-ers are revealing today as well:

Betty at a Flickr site: http://www.flickr.com
Catherine at Knotted Cotton
Elizabeth at OPQuilt.com
Nancy at Patchwork Breeze
Rachel at The Life of Riley
Simone at Quiltalicious
Susan at PatchworknPlay 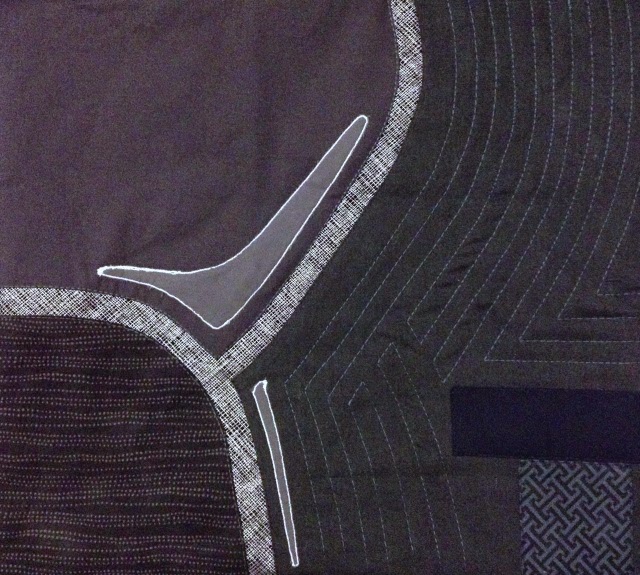 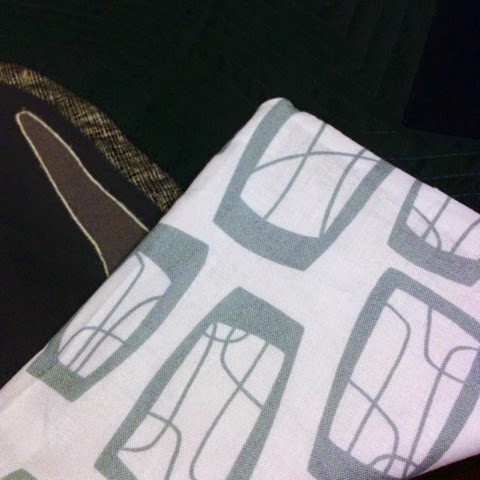 I'm off galavanting in Spain right now. I thought this was as close to a fabric store as I was going to get 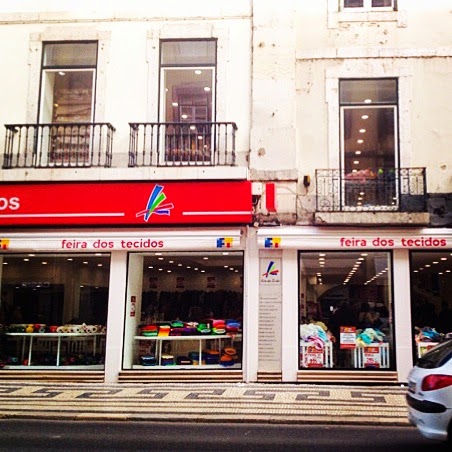 Across the street in Lisboa, Portugal. We did pass another tiny shop that had beautiful woolen plaids that we could see through the window. But as the price was 85 Euros plus a meter so we didn't even go in. We got back to Spain and heard there was a flea market each Monday in town so we headed off to see it. The sun was super bright and every person in every stall was yelling at the top of their voice. Crowds were talking and pushing and it was totally overwhelming. Good think I saw the fabric at the beginning because at the end I just wanted out of there. I bought an overpriced panel because I liked it and there were no more left :) 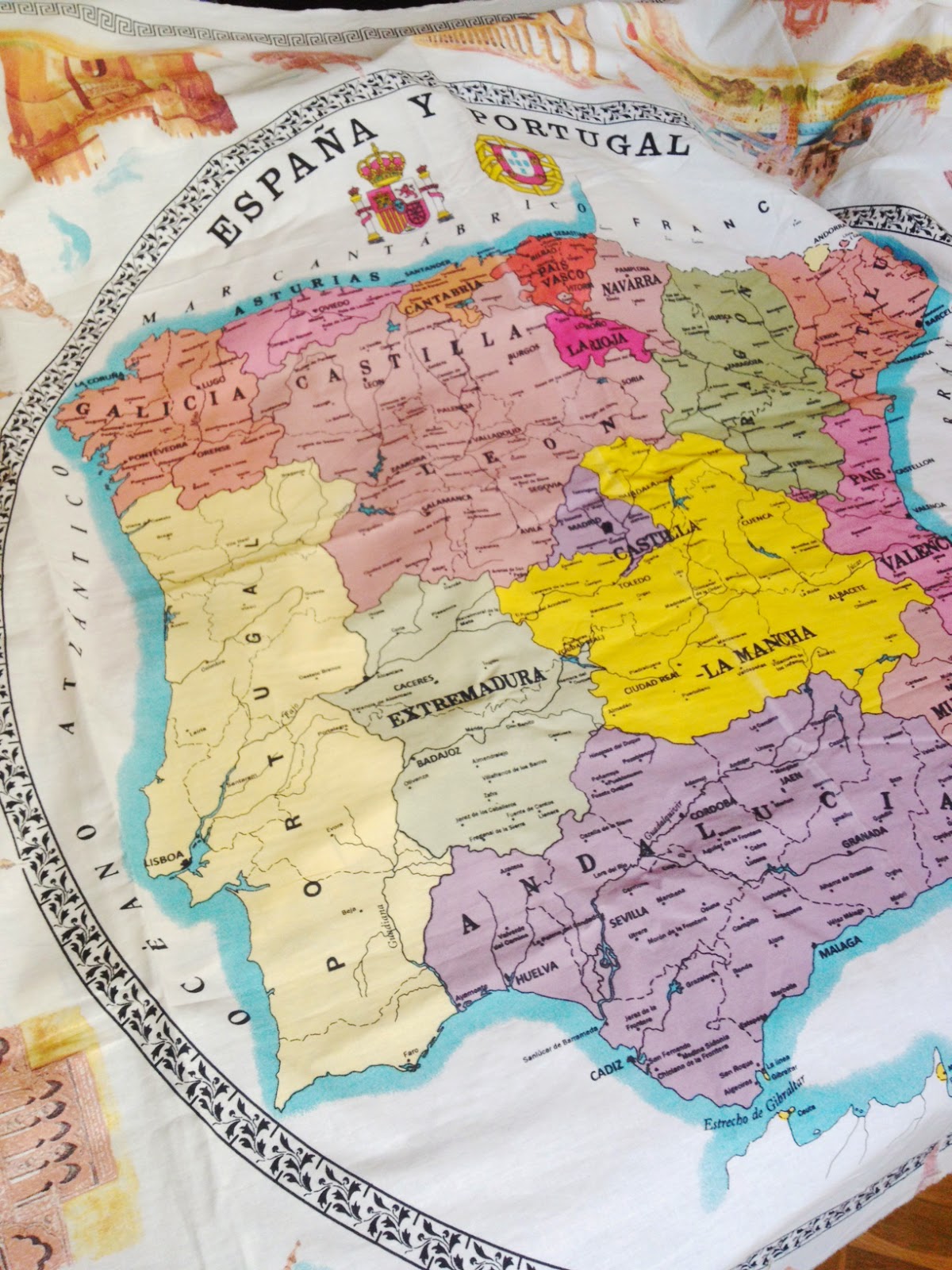 The bottom part of the panel is cut off, which isn't awesome. If I weren't leaving the country before I could go back to the market I'd have waited to buy a whole one. One always need a giant map of Spain on fabric don't you think? I've been mainly in the small purple blob in the middle, otherwise known as Castilla, but i've been up to Castilla y Leon and a bit south to La Mancha. The places I didn't make it to were Galicia and Valencia. If only I'd had another week and a different brain :)

I seem to always have a hand stitched embroidery project going on. I can embroider at night on those occasions when the sewing machine might be too loud. Like when there are guests and they aren't used to the mad scramblings of 2 AM sewing burst.

I can also occasionally do some at get togethers or other random places. I usually fold it up with a bit of padding and cart it around in a bag, tote or zip close bag. I think a travel work station case would be great. I've thought of how I'd like it to be and even looked at a few that others have made online. I haven't seen any that I love yet. Do you have any suggestions or ones you've made or seen?

This is a little bit I'm working on for the top half of a project. And the green stitching is for a swap I'm in, also In progress.

Random Number Generator came up with lucky number 5. Woot! I've notified the winner by email and thanks for throwing in your hat in everyone! 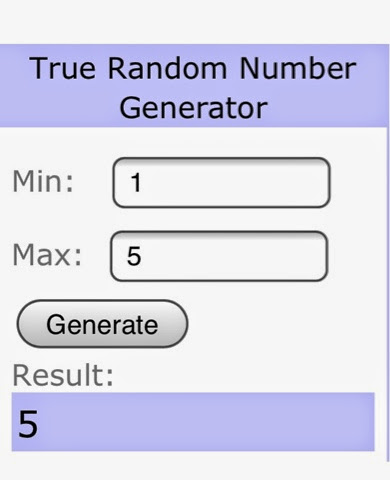 This is a tote just as it seems :) I can't tell you more about it as its a secret gift. As soon as its received I'll tell you all about it.

There's also a Traveling Stash Box up for grabs on my previous post. 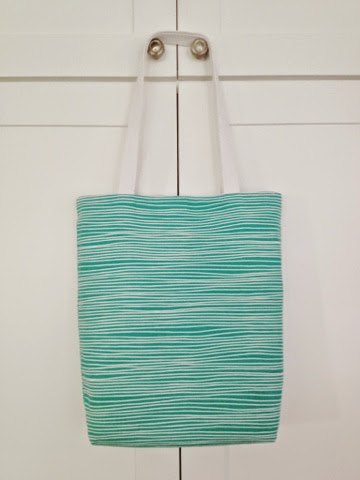 
I have wanted to join in on the Traveling Stash box fun ever since I first heard of them. There are a number of boxes literally traveling around the U.S. full of fabric and goods. I won the box from Deb at A Simple Life Quilts. So exciting! Here's a picture of the most of the fabric, notions and patterns that arrived including: Salt Air charm pack, partial charm pack, elastic chord, fat quarters, yardage, sparkle beaded decoration, ruler, twin needle, seam ripper, sewing kit, thread conditioner, needle threaders, a big zip lock full of tons of quilting patterns, a great embroidery booklet, buttons and Aurifil. There may be a few other things I've forgotten but there's a bunch of stuff. 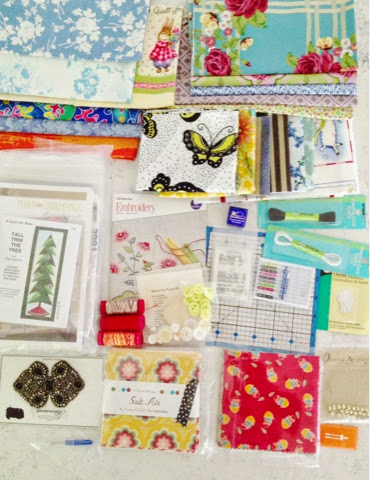 With things like traveling stash boxes you never know what you're going to get, really. There are many different tastes and choices for fabrics and notions. That's how the fabric business is worth probably billions of dollars. All that being said, many of the fabrics in this box were not my style. On the other hand, there was some great stuff that my LQS's don't carry and it was great to be able so have some. I did find things that worked for me and almost kept the Salt Air but decided to let someone else keep it.

Here's the other thing about traveling stash boxes, they go to peoples houses. Some of those houses have fur babies. I am allergic to those and had a really hard time. Usually this box has a week turn around. You get it, take what you want and send it on. I had to air out the box many times before I could do a final switch out. So from friendly advice would be, if you have allergies be aware that this can be an issue and if you have pets please try and keep the goods away from your fur babies.

There was a final third yard that I couldn't decide what to switch out. So I'll leave it up to you! Would you like the modern graphic Collage from Carrie Bloomston, the Riley Blake Pretty pinwheels from Country Girls, or the classic blue and white Swirly Girls design from Michael Miller in homage to our Independence Day July 4th.


The Giveaway for this box will remain open for one week. YOU MUST BE AN ACTIVE BLOGGER to receive The Two Sisters Travelling Stash. This box is limited to travel within the United States only. Please leave a comment and the giveaway will be closed on July 9, 2014. *Edited* And the winner will be announced July 10, 2015. Thanks for stopping by!

I Love love these ballet shoes! I got to pattern test for Tartankiwi again and the pattern was perfect. There are a few pieces to this one so it took me a few hours. I like to precut my fabric the rough size of the piece I'll be using. It seems to take longer to cut but then piecing goes so quickly. The colors are two shades of Kona Cotton pink and an aqua colored Sketch.

The pale pink is supposed to look like the pink tights little ballerina's use. I can just see this as the front of a tote bag for my niece. To put her ballet things in for class of course! Perfect :)

Tartankiwi has the best paper pieces patterns. Although this has a few pieces, sewing it together is straightforward and simple. All the sections meet up perfectly. There are also a couple of pages you can print off that help with fabric and piece placement.

I find the design elegant. Here's me deciding on skin color or tights color. Have you paper pieced any blocks lately? 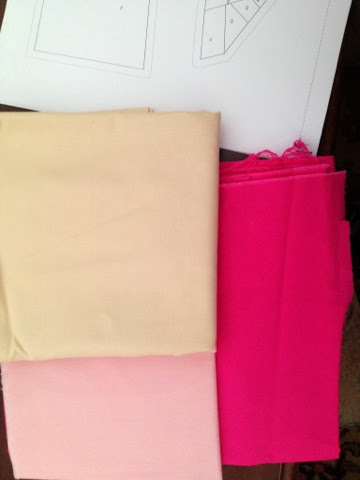 jeifner
I love creating. I sew, crochet, knit and various and sundry other things. Welcome! A quick note: please be a friendly and law abiding reader or lurker. All of my photographs and creations are copyrighted. If you would like to use or share them, please link back to me or ask for my permission. Thanks and cheers!

A Lovely Year of Finishes

Merrily We Sew Along!